Chace Swatek and "Huffing": Did Dust-Off Cause the Death of an Alabama Attorney? 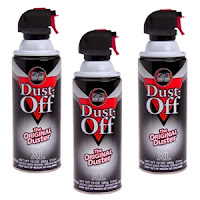 The abuse of inhalants, known in street terms as "huffing," once was limited mostly to adolescents and adults living in poverty.

Chace Swatek, a 35-year-old lawyer with a penchant for driving Mercedes vehicles, did not fit into either of those groups. But a source tells Legal Schnauzer that evidence at the scene caused investigators to conclude that huffing was the likely cause of Swatek's death. An official cause of death will not be known until a toxicology report is completed, and that is expected to take six months to a year.

If Chace Swatek did not fit the common profile of a "huffer," what did law-enforcement officials see at the scene to make them think he was one? The answer to that question is not clear, but a spokesman for the Pelham Police Department said Swatek died on the return portion of a two-mile roundtrip walk from his home in the Mallard Pointe subdivision to a CVS Pharmacy near the intersection of Shelby County 35 and 52. His body was found behind steel pipes that were stacked on the shoulder of the road.

A CVS bag containing a receipt and several items was found near the body. Officials have declined to identify the items in the bag because the case remains under investigation. Those facts, plus the information from our source, hint that Chace Swatek might have become addicted to a product that seems to be changing the face of huffing.

It's called Dust-Off, a refrigerant-based propellant cleaner that is designed to clean computer keyboards and other electronic equipment. You probably could randomly walk into 10 office settings, in any part of the United States, and each one would have multiple cans of Dust-Off. Some office-supplies stores sell them in 12 packs.

The product has become ubiquitous, but it is not always used for its intended purpose. Not long after being introduced, Dust-Off became known for its ability to produce an intense high when inhaled. The process became known as "dusting."

A 2005 MSNBC article describes dusting as "the new killer high for teens." From the article:

There's a new way to get high, and you could have it right next to your desk at home.

They're designed to clean your computer but, if inhaled, these popular products have the potential to kill. It’s called "dusting" — the term comes from the cleaning brand "Dust Off" — and it has become a teenager’s new cheap and easily accessible high, despite a warning on the side of each canister.

This form of inhalant abuse, “huffing,” has been around for years, but dusting is the more specific term associated with the use of cans of any common aerosolized computer keyboard cleaner that contains compressed gas.


By 2010, the Naples Daily News in Florida reported that huffing was becoming a growing problem among adults:

Known as huffing, sniffing, bagging or dusting, experts say inhalants and other household products are most commonly abused by teenagers — 3.9 percent of adolescents abused inhalants in 2007, according to the National Survey on Drug Use and Health.

But in early March, Naples police arrested 37-year-old Jennifer Marie Fernandez after finding her passed out in a puddle of vomit behind an office supply store with two empty cans of dust remover. She was arrested twice before in the past year after being found passed out on dust remover in McDonalds and Walmart bathrooms.

Fernandez is one of at least three women in their mid-to-late 30s who were arrested on charges of huffing dust remover in Collier County over the last two of years.


Dust-Off seems to be the inhalant of choice for adults. Consider these news items from the past few years:

* Utah man is caught huffing air duster while driving (May 2012);

* Oklahoma man arrested for DUI after huffing aerosol duster (May 2012)

Did Chace Swatek walk to the CVS to buy a can of Dust-Off? (According to its Web site, CVS carries the product.) Did he walk because he already was high and feared being pulled over for DUI? Was he so desperate for a hit that he sneaked behind the pipes, out of the view of traffic, to take a few quick sniffs of Dust-Off? Did Chace Swatek experience a cardiac arrhythmia in what has become known as "sudden sniffing death syndrome"?

We probably will never know the official answer to all those questions. But we do know Chace Swatek purchased several items that were found in a CVS bag near his body--and authorities will not identify those items because they are part of an ongoing investigation. That seems to indicate that something in the bag might have contributed to Swatek's death.

I'm not aware of any prescription drug that is likely to cause a seemingly healthy 35-year-old man to die suddenly behind a stack of pipes. But we know that dusting can cause cardiac arrest and sudden death.

Perhaps the most important point is this: A number of products that are commonly huffed can seem nasty or smelly. That apparently is not the case with Dust-Off. Because of its ties to computers and electronics, it has a professional, cool vibe.

Maybe that's why it appeals to adults who need a quick, "reputable" high. Maybe that's why some adults don't associate Dust-Off with danger--until it's too late.
Posted by legalschnauzer at 11:38:00 AM

Lawyers & folks in the military do tend to use substances like this because of the demands on their time. When lunch is catered or you're required to eat at the cafeteria in the building where you work, you can't be going across town to see your drug dealer. Some law firms require employees to live within walking/bus service distance. Your drug dealer won't be able to come see you because everyone who comes to the office must check in with security.

Buying cleaning supplies at the 24 hour drug store after the pharmacy has closed may be your only option for getting high when other people are in control of your schedule. I've been in the military & have worked for a law firm that served catered meals & required me to live in the building. Had I been a drug addict, I would have been unable to get high using traditional methods. It's no wonder so many people resort to "shake & bake" meth & huffing.

People usually turn to drugs after a divorce or relationship breakdown that started because they can't get enough time off from work. Want to go see a baseball game or watch a movie with your girlfriend or wife & kids? Good luck with that!

The police & courts are run by former military officers who are accustomed to going to war or planning for the next one. Our society is controlled by folks who just don't give a shit about family life. With all kinds of "good pussy" & "drugs that will blow your mind" waiting at the brothels in the next Asian country we are going to invade. Who cares about family? Bring on the "little brown fucking machines" as Alabama Lawyer & former Army Sergeant Robert Francis Nelson would say.

Let's hope the next time we deploy, it's The Philippines. You can buy a 12 year old for $50 and throw her in the back of the 5 ton with the gear as Gunnery Sergeant Donald Wright would say. It's the Marine Corps way!

I wonder how many people go to law school, thinking of big bucks and a glamorous lifestyle, and wind up working in the kind of environment you describe.

It sounds like higher ups in the military, law enforcement, law offices, etc. don't want well-adjusted people to be part of their environments. They want people who are maladjusted in some way. They probably are more likely to go along with the warped program.

If a relatively balanced individual sneaks through the cracks, he/she probably is run off.

You really do have to laugh at the GOP's "pro family" mantra.

LS:
You scenario makes a lot of sense. I've never figured out how Chase Swatek just happened to die behind a bunch of pipes. Seems to me he had to go back there intentionally, for a reason.

My 34 year old daughter, and mother of my 10 year old granddaughter, just died of cardiac arrhythmia after huffing Dust Off purchased at a local WalMart. She, too, walked there to get it and and purchased several cans at one time. There was NOTHING else in her medical history that would have caused her death and a nearly full can of the stuff was lying close beside her body. By the way, she was a substance abuse counselor. There is no profession immune.

So sorry to hear about your family's experiences with huffing. It's a serious problem, and I appreciate you sharing with our audience.