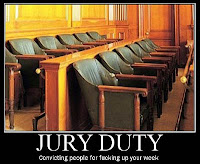 I am due to report to jury duty next week at the Hugo Black U.S. Courthouse in downtown Birmingham. That's hardly earth-shattering news under normal circumstances. But given the judicial corruption I've written about on this blog--and given signs that the Alabama legal cartel is nervous about my journalistic endeavors--I'm a bit concerned about serving my civic duty.

On top of that, I've seen signs in the past 24 hours or so that someone might be messing with our phone service. And I received another delightful missive yesterday from Chad Essick, the North Carolina-based attorney for Campus Crest Communities CEO Ted Rollins. It seems my recent video interview with Sherry Rollins (Ted's ex wife)--plus my reporting about her son, Zack Parrish (Ted's ex stepson)--has caused quite a stir in RollinsWorld. More on those events later, but suffice to say that I'm already dealing with third-rate thugs, and I'm not in the mood for more silliness related to jury duty.

This is the third time I've been called to federal jury duty in the past seven years. I was called in 2005, again in 2007 or '08 (I think), and now in 2012. Given all of the people who live in the Northern District of Alabama, and the fact that roughly 90 percent of trials are held in state court, it seems odd that my name would keep popping up on the jury-duty list. And I can't help but wonder if the feds have some ulterior motive in calling me for next week.

Mahmoud Ahmadinejad probably has a better chance of being elected prime minister of Israel than I do of being selected to a jury--in any court, at any level. Lawyers who strike juries almost always want folks who've had little or no experience with the justice system and have nothing much in the way of opinions about the legal process. Regular readers of this blog know I hardly fit that profile.

Between Mrs. Schnauzer and me, we have four (I think; I lost count) pending cases in federal court. That alone will probably cause me to be stricken. I've written extensively on a pretty well-known blog about all sorts of underhandedness by just about everyone connected to courts--lawyers, judges, clerks, custodians. Aside from law librarians, who I have found to be helpful and decent folks, I have utter disdain for everyone connected to the "justice system"--and I have spelled out in detail on this blog why I feel that way.

That, of course, doesn't mean that I should be spared from being called for jury duty--even if it means I almost certainly will be sent packing very quickly. But three times in seven years? That seems pretty excessive to me.

For the record, you can spare me that crap about American jurors being noble, honorable, selfless servants. I've witnessed two jury trials from start to finish--one in state court, one in federal--and both times the juries didn't come close to getting anything right, based on the facts and law that were presented to them. Chuckie, the ground squirrel who busies himself by digging holes in my back yard, has more brain cells than the jurors I've seen in action. I'm convinced that juries easily can be corrupted. And even those that aren't, based on my experience, tend to consist of dunderheads who don't give a rip about justice. They just want to get home to catch the soft-core porn on Cinemax.

Here is my main concern: I know from my previous times on jury duty, that you are essentially under "federal custody" throughout the experience. That's not a problem if you have reason to trust your local federal officials. But I've witnessed gross corruption in the Hugo Black Courthouse, and I've written about it. I know what it's like to have federal marshals follow me around when I stop by to conduct business in the clerk's office. I know that numerous folks from the U.S. Department of Justice, uscourts.gov, and influential Birmingham law firms monitor my blog on a daily basis. I feel certain they aren't doing this for fun; they are doing it because they see me as a threat. And I don't like the thought of being "under their thumb"--if only for a few hours.

Is this call to jury duty an effort to threaten me or trap me in some way? That might sound loony to some people. But it doesn't sound loony to those who know what our system is really like. I relayed my concerns to the New York-based documentary filmmaker I wrote about the other day, and he said I was wise to be on the alert. This fellow has up-close experience with the "justice system," and here are his words:

Be careful at jury duty. You don’t need to hear it from me (obviously) but these guys take names. Did you check out what John Corzine told congressional investigators about the $1.2 billion that went south just before MF Global went belly up in Chapter 11? Much of it, Corzine confessed, will “never” be recovered; the 1.2 simply “vaporized.” These kleptocrats are playing for keeps, bro. And as long as these Bozos are strip-mining the country’s resources we’re slightly expendable.

It's tempting to "call in sick" for jury duty, but the easiest thing to do, I guess, is to show up.

As for Ted Rollins' lawyer, I will be sharing my latest back and forth with him. As for our phones, I'm not quite sure what is going on. I'm still checking for the possibility of a technical problem on our end; but at the moment, I'm leaning toward the notion that someone is tampering with our phone service.

What really has my goat? Well, here it is: This is the third time in seven years I've been called for federal jury duty, and when you add one appearance for a cattle call at the Shelby County Courthouse, that means I've served my "civic duty" four times since 2005. During that time, Mrs. Schnauzer has been called zero times--the big goose egg.

I'm starting to sense that she's gloating about it. My first clue was that she broke into what we call "the shove it, love it, and dance around above it" dance. It's a little number we learned from Dr. Chris Turk on Scrubs. Here is an example below. It will give you an idea of what I've been living with:

Make sure you take your recording equipment & ensure your family can track you. Might want to take the film maker along also so he can start documenting.

Yes, one does have to be careful. You might be safer in the jail with the inmates when with some of these respresentatives of the "justice" system.

Oh, & while you are gone please hire some protection for Mrs. & the pets. Alabam does not sound like a safe place for any body who doesn't go along with the drift.

are you not a breadwinner as an independent? my understanding is the entrepreneur is exempt from jury duty, that is, the individual who must earn the monies for the home, and when the source of funds to live is minimal, well that cannot be thwarted.

check out the law-rules on the money income earner, there is a shield for the person who must bring home the bacon. how can you earn enough while on jury duty? nah, can't.

must stay home and earn the dough for the keeping alive state of affairs.

be afraid, very-very afraid, jury duty can put your livelihood in grave jeopardy, and not just the need to manufacture income.

be well and stay safe/rkelly

I somehow managed to delete a comment from Robby Scott Hill, and I can't seem to recover it. RSH's comments are more popular than anything I write on here, so want to make sure it gets out:

Yes! Convicting people for jacking up your week & in some cases letting them go so they can get back to the soft core on Skinemax LOL :)