Conservatives' Use of Animal Abuse Should Come As No Surprise 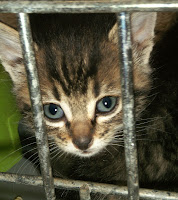 An apparent political hit on a family's cat in Arkansas has drawn national attention, and it's one of the most nauseating stories I've read in a long time. I only wish I could say it came as a surprise.

Since starting this blog in June 2007, I've written frequently about wrongdoing among conservative elites in Alabama and beyond. That has made me a fair number of enemies, enough that both my wife and I have been cheated out of our jobs. But the abuse has not stopped there. We learned a long time ago that conservative thugs enjoy using threats--and they don't mind targeting family pets.

The title of this blog hints that animals are held in high regard in our household. Our current pets, the Tonkinese kitty kat combo of Baxter and Chloe, mean the world to us and are treated in a fashion that Will  and Kate would recognize. Our previous pet, a miniature schnauzer named Murphy (1993-2004), meant so much to us that this blog is devoted to her memory.

What form of scum would kill a family cat, scrawl the word "liberal" on the corpse, and leave it for a Democratic politico and his children to find? I probably don't possess the vocabulary to adequately describe such a lowlife, but I'm not surprised that someone who apparently identifies as a conservative would kill an animal in order to make a political threat.

That's because I've received numerous animal-related threats via e-mail or anonymous comments on this blog. Our cats are pretty low key, and the blog title does not refer to them, so they have remained out of the rhetorical fire (so far). But conservative dirt bags have made regular sport of leaving nasty comments about our dog. Here is a sampling from a post titled "Unmasking Right-Wing Sickos?"

To truly grasp the depravity of the right-wing fear mongers, you need to see the anonymous comments I have not let through. Following is a sampler of such comments divided up by subject:

ON OUR DOG MURPHY

are you sure your dog died a natural death? maybe, maybe not...you will never know will you?

You are such a little man...such the small person. You offer nothing to the world other than your pitiful rantings. How is your dog?

Your Schnauzer has no bite because he is dead. Why did you roll over and kill your dog? Possible animal cruelty charges to come.

The most chilling message, of course, is the first one, where someone actually hints that Murphy might have been murdered. Whoever left that message probably does not live around us or know us very well. That's because Murphy was an indoor dog, except when we took her for daily walks or let her out onto our screened deck. She never was outside without our supervision, so the only way her death could not be natural is if someone broke into our house and poisoned her. Our vet told us that Murphy's symptoms prior to her death did not suggest that she had ingested a harmful substance, so poisoning of any kind almost certainly was not a factor. Plus, we never saw any signs of a break-in.

Sicko No. 1, by saying "you'll never know" about the cause of Murphy's death, was trying to plant doubt in our minds--a weak attempt at psychological torture. But like many conservatives, No. 1 is not terribly bright. We know exactly the environment Murphy lived in, so we have no doubt that her death was from natural causes--and we know what the natural causes were.

In light of recent events, here is the key point: This individual, apparently a conservative, wanted us to think that someone might have killed our dog for political reasons--because I write what could be called a progressive blog.

Am I surprised that someone actually did kill a cat, all because it belonged to a Democratic household? No, I'm not. I've had direct communication with people who share that very mindset.
Posted by legalschnauzer at 6:30:00 AM

And they call themselves the religious right and Evangelical Christians while they call African Americans thugs and criminals.

Mohammed Atta cut up his ex- girlfriend's cats a few weeks before he crashed a plane into the World Trade Center on 9/11/2001. The FBI pretty much ignored that incident just like they ignored the fact that Don Siegelman was framed by overzealous GOP operatives.

Robby totally off subject. BUT since Richard got his time reduced do you think they will drag this thing out with Siegelman and then say time served?

This story is sad.. It goes to show there are nuts on both sides.

This story is sad.. It goes to show there are nuts on both sides.

@Anonymous - Without his money, Richard Scrushy is no threat to the next GOP candidate for Governor of Alabama. What eventually happens to Don Siegelman all depends on whether Bob Riley has plans to run for Governor again or if he wants his son Rob Riley or a close associate to run. An exonerated or freed Don Siegelman throws a huge monkey wrench into the Riley Dynasty's quest to regain to Governor's Mansion and possibly take the White House. I look for Siegelman to go back to prison or home detention once his appeals are exhausted and stay there until a Riley has a chance to compete in the 2014 Governor's race. If a Republican doesn't take the White House this year, Bob Riley becomes a Presidential contender in 2016, especially if he is re-elected to the Governorship in 2014.

Excuse my ignorance, but Riley can run for governor again, even after he's already served eight years? I thought it was "two terms, and your're done." That's not the case?

Roger - It's two consecutive terms & you must sit out for four years, but you can come back for up to eight more years after the four year break.

Thanks for educating me, Rob. The thought of eight more years of Bob Riley is scary. I like to think he is "damaged goods" and wouldn't get too far, but who knows in this state? I do wonder about Jr. taking a run at the governor's chair. He seems to have grandiose plans for himself.

Do any of us in our right mind thing Riley would get elected again???? I hope to God not!! xx

He was founder and co-chairman of International Family Entertainment Inc., whose principal business was The Family Channel. The company was sold in 1997 for $1.9 billion to Fox Kids Worldwide Inc., a subsidiary of Murdoch's News Corp. Disney bought the channel in 2001.