Ernie Potvin was a prominent figure, especially on the West Coast, in the fight for gay rights in the United States. He wrote scores of articles for newsletters and magazines, he was an active member of a nonprofit organization that focused on issues and history of the gay and lesbian movement, and he produced a movie about gay life in the Los Angeles area.

Potvin also helped organize one of the nation's largest archives of books, articles, photographs, and other items related to the gay-rights movement.

This last attribute--his desire to keep and gather items related to gay life--is one of the primary reasons we suspect Ernie Potvin played a key role in helping gay-porn photos of U.S. Circuit Judge Bill Pryor surface across the Internet in fall 2013.

Potvin almost certainly would appreciate that the Pryor photos might wind up having historical significance. After all, Pryor has been virulently anti-gay in his public statements, and we have shown that his personal secrets have made him vulnerable to blackmail--ensuring that he will help conservative interests get their way in key cases before the federal bench. The photos also strongly suggest that Pryor lied during his Senate confirmation hearings and should be subject to impeachment proceedings.

As we reported in September 2013, the Pryor photos appeared in the 1990s at the badpuppy.com Web site, which has grown to become a "super store" of gay, male images. The Web site was in its infancy when the Pryor images appeared around 1997, and a notation at the top of the nude gallery provides a clue about the photos' origins. (A screenshot of the gallery can be viewed at the end of this post.) Here is what it says:


So, who is "Ernie"? Here is a clue: Ernie Potvin served at the One Institute, a gay-themed nonprofit affiliated with the University of Southern California (USC). Potvin wrote for the One Institute newsletter and also for Gay Today magazine--which had an affiliation with Bad Puppy.

Potvin also was a friend and associate of Jim Kepner, who was a leading activist and historian on the gay-rights movement. This is from a New York Times article about Kepner's death in 1997:

The cause of his death was a perforated intestine, said Ernie Potvin, a board member of the One Institute. The nonprofit organization, which concerns itself with lesbian and gay issues and history, includes an archive begun by Mr. Kepner in 1942.

The One Institute is affiliated with the University of Southern California and encompasses a collection of two million items, including books, pamphlets, magazines, clippings, letters, photographs, paintings, recordings, films, videos and political banners, buttons and T-shirts.

Started when the mere whisper of homosexuality was considered scandalous, the archive offers historians and scholars vivid glimpses into the turbulent civil-rights struggle by gay men and lesbians.


How important a figure was Kepner in terms of preserving gay-rights history? An article from The Los Angeles Times, again citing Ernie Potvin, provides insight:

Jim Kepner, founder and curator of the International Gay and Lesbian Archives and a pioneer gay activist, has died. He was 74.


Kepner died Saturday at Midway Hospital in Los Angeles after surgery for a perforated intestine, said Ernie Potvin, a member of the archives executive board. . . .

The collection, valued by gay studies scholars around the world, is housed at USC. Other universities, including UCLA, Stanford and UC Santa Barbara, had vied for the archives.

"All of the public institutions for many, many years seemed like our enemies. So it's very astonishing," Kepner told The Times when USC won the treasure two years ago.

The Texas-born Kepner started collecting memorabilia and reference material when he was working as a railroad clerk in San Francisco in the early 1940s. At that time, he said, he and gay friends were just "trying to figure a way to come out of the closet."

"I've always been inquisitive," Kepner told The Times in 1988, "and, even though I never envisioned that the collection would evolve to what it has become, I always had an innate sense that what I was doing was important. It was something I felt driven to do."

We know that Ernie Potvin was an avid collector, and he had ties to numerous gay publications, including Gay Today and Bad Puppy. Our research leads us to believe that he is the "Ernie" who helped provide the Bill Pryor photos that wound up on the Web.

Can we contact Mr. Potvin and ask him about this? Sadly, the answer is no. He died of heart failure in 1998. Here is a brief biography from the California archive:

Born in Massachusetts in 1931, Ernie Potvin moved to Puerto Rico in 1956. He later helped to found one of Puerto Rico's first gay and lesbian rights organizations, Comunidad De Orgullo Gay, in 1972. After moving to Los Angeles in 1976, Potvin worked as an actor, a journalist for local gay publications, and a commercial graphic artist. He volunteered for gay organizations such as the Los Angeles Gay Men's Chorus, Christopher Street West, and the ONE Institute and Archives. Potvin died of heart failure in 1998.


We have tracked down a number of Mr. Potvin's friends and associates who might have details about the origins of the Bill Pryor photos. We are in the process of contacting them and will let you know what our research uncovers.

The Wikipedia page for Badpuppy says "The website has increased its consumer base through online campaigns as well as Gay adult print publications over the years such as: Allboy Magazine, Freshmen, Men, Unzipped, JustUsBoys, Playgirl Magazine, Mandate, Dude Magazine and others." Our research indicates the Pryor photos probably first appeared in at least one such print publication in the 1980s before resurfacing in the 1990s on the Internet.

Who served as the conduit to take the Pryor photos from a print format into the digital era? We believe it was Ernie Potvin. 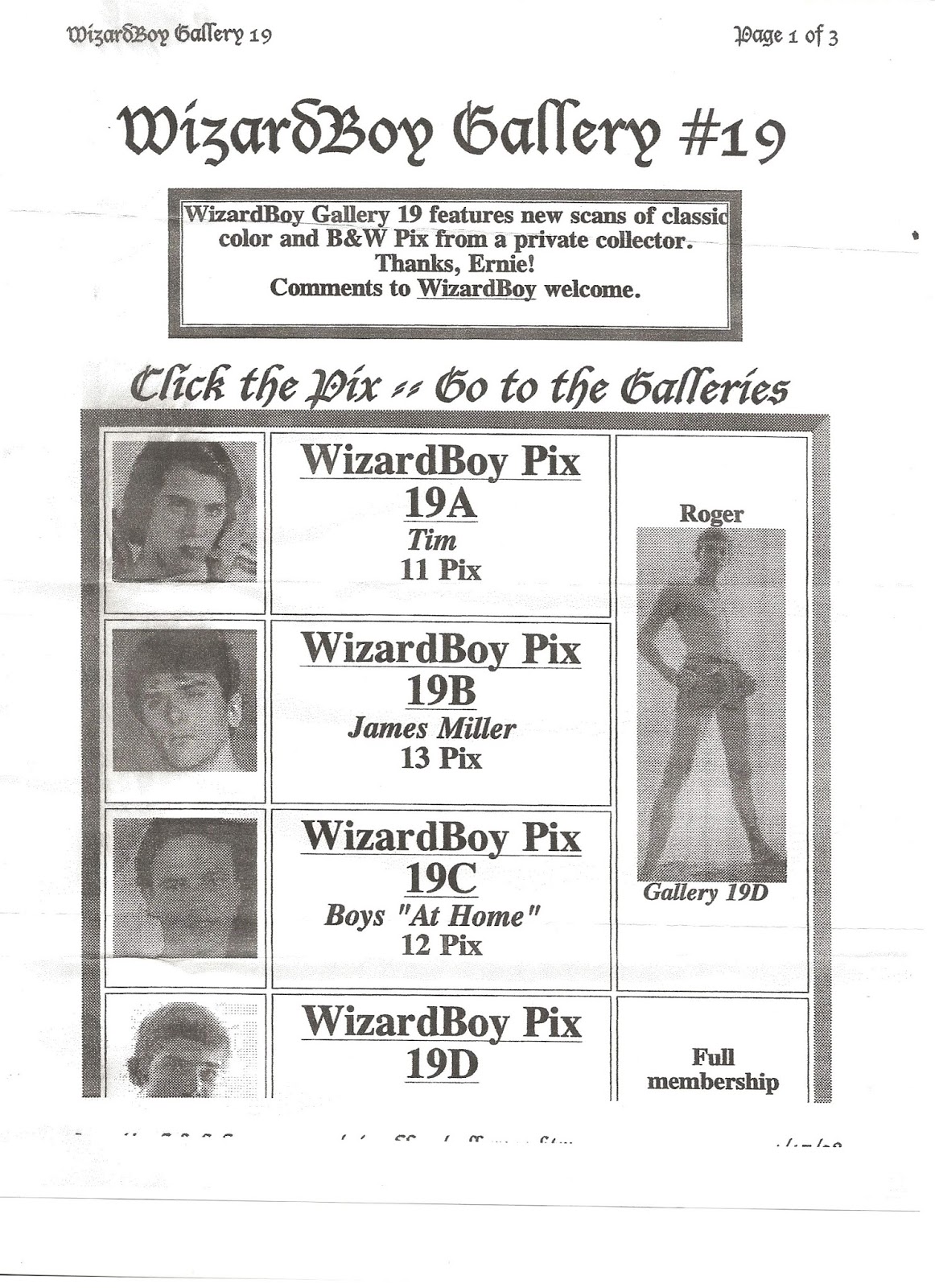 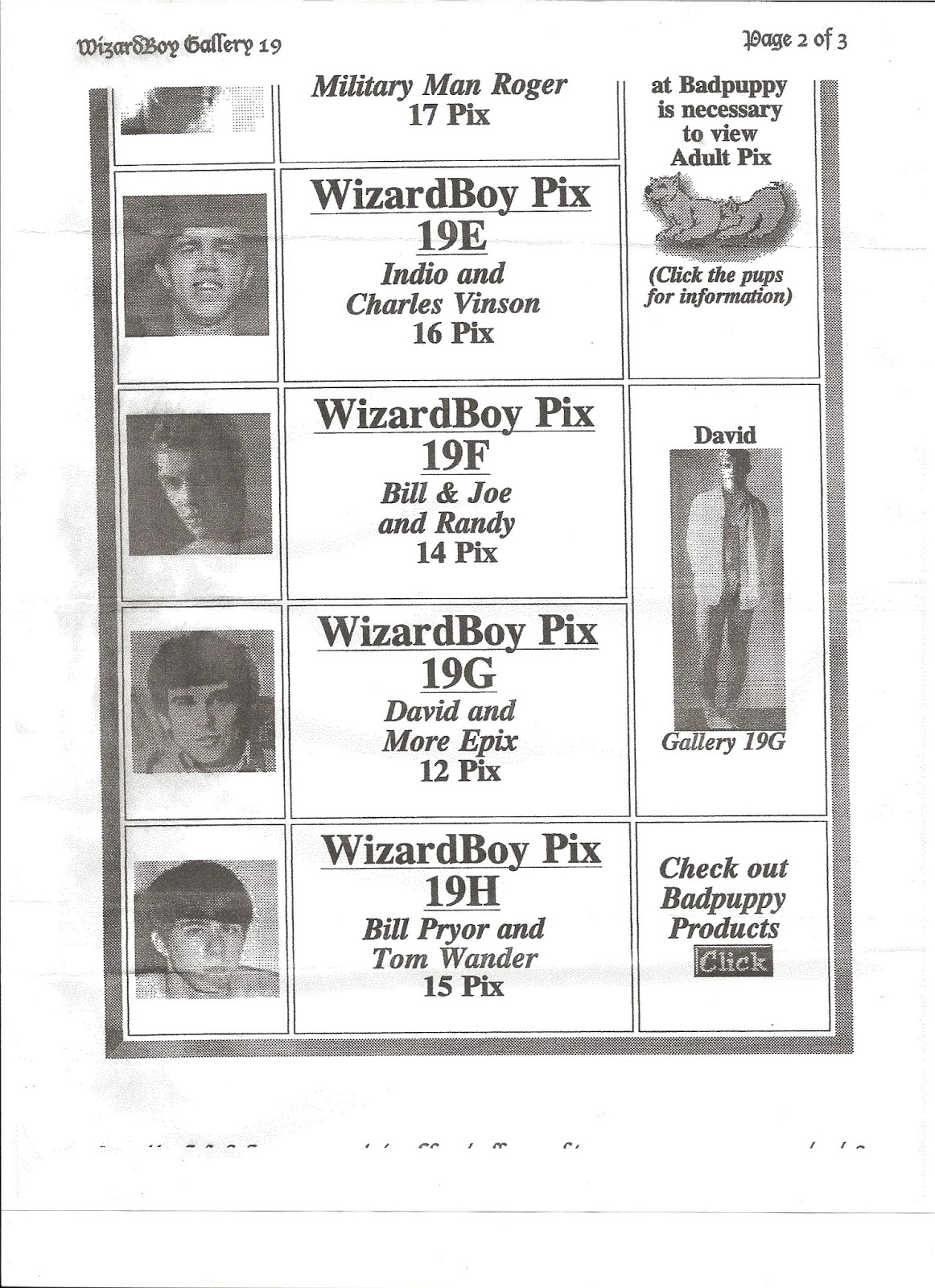 This is fascinating stuff. Who knew there was an archives of gay history?

I wish Ernie was still alive. Would love to know what he thinks about all of this.

Yes, I think Ernie would be a most interesting man to interview. I've learned the names of several of Ernie's close associates, who are very much alive. Working on getting in touch with them.

You make a compelling case that this is the Ernie who made these photos available. I'm sure Bill Pryor is deeply appreciative.

I bet old Ernie lived a pretty interesting life. By helping to out Bill Pryor, he's even doing good deeds in death.

You've uncovered an interesting fellow here, Mr. Schnauzer, aside from anything having to do with Bill Pryor. I did a little research and found that Ernie Potvin played a minor role in the 1980 film "Silent Scream."

Yes, Dee, Mr. Potvin was a well-rounded guy--an actor, author, singer, activist, historian. I think he has credits for graphic design on several video games from the 1980s.

Any chance Congress could hold joint impeachment hearings for Fuller and Pryor, so we could get rid of both of them at the same time?